Every TWL or SOWPODS player knows that Q is the last tile anybody wants to pet around for too long. The reasons why that is so is obvious. The first being: it’s the least flexible letter. The second: it’s a ten-point letter—Her Majesty is a heavyweight. But getting rid of it quick doesn’t necessarily mean as soon as possible. 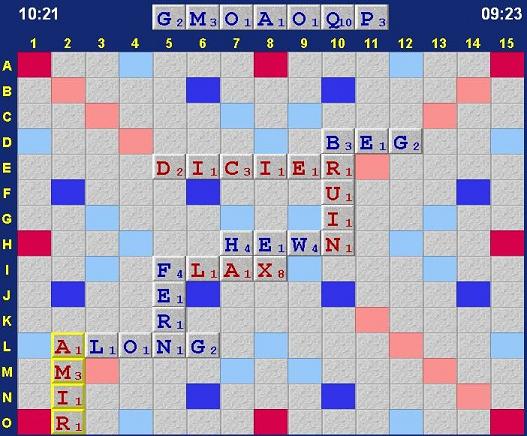 Here, 8D: QI would easily free me from the Q with some agreeable points. But with three U’s still up, there’s no need to rush. In fact, I was thinking about F10:UMIAQ and 81:MAQUI and looking for ways to dump the letters GOOP productively. There was something else, though. Red’s last move surely called for an immediate answer. Obviously, O1: PRAM/PROM was a no-go, I needed the A/M for UMIAQ/MAQUI. Therefore, PROG looked quite sensible.

After Red’s IRON and LAUD, things changed a little bit. There were only two U’s and four I’s left for MAQUI or UMIAQ (without having to use a blank). OK, no problem here. But with the bag then more than half empty and none of the four S’s was down yet, UMIAQ didn’t look attractive anymore since it could invite an easy S-hook along with a TWS. Still, I hanged on. 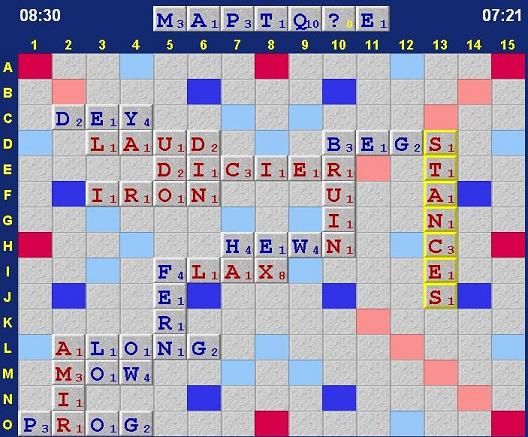 Red had just taken over the lead. If he also had OZ on his rack after the bingo then H13:COZ would be coming up on his next move for another tasty score. Time to dump the scary Q? No way! Not me, anyway. Just look. This was middle game already. Of all the nine A’s, only one came to me. And not a single one of the four U’s or nine I’s. My moves was dominated by consonants, so far. Chance is, for the rest of the game, I would be having little trouble collecting vowels. And in this game, this was all the more reason to hold my Q. With B1: PET, the scores of both players would still be even, and I still had the blank. So i decided to give Her Highness one more shot.

How did I know I would draw a U in the next turn? I didn’t. But we can see it this way. The chance of either head or tail in a coin flip is 50-50, right? It means that if the first five flips are heads, then the sixth will be pushing for a tail (and if the first ten are tails, then the eleventh will be yelling aloud for a head). See what I mean? It’s cosmic. 🙂

I did make the elusive MAQUI on the next turn (after making PET), with a clean 51 points (by ‘clean’ I mean without using the blank and without giving my opponent an easy big scoring countermove using the move I’d just made). Moreover, Red didn’t have the OZ combination. I did. And yes, I had guessed correctly: I didn’t have any trouble collecting vowels. Hurray! Now without a bingo, Red would have a hard time catching up (11J:ZOEA, 40+).

————————————
Rule of thumb: keeping the letter-Q for too long on the rack is generally not a good idea, since it usually will cost the rack (serious) flexibility.